How To: Get Music Played on College Radio 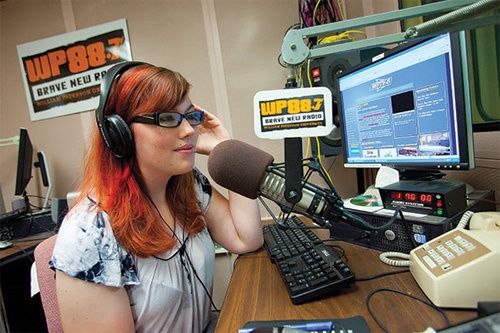 For a young band or artist, radio airplay can be a crucial factor in their success. Airplay helps both in terms of promotion and, more relevant to Songtrust, from a royalties standpoint.

With the rise of internet streaming sites like Spotify, many artists are tending to ignore radio airplay in favor of digital listening. Trouble is, royalties from these digital sources does not yet compare to those being generated from terrestrial radio (read more: Royalty Roundup). For a young artist, College Radio can be a great place to start - before making the leap to more established, commercial stations.

So, how does an artist go about getting spins? Colleen P. Calabro, Station Manager of WMVL Radio 88.1, gives us the lowdown.

1. Work with a radio marketing/promotion company

Tinderbox has stated that it costs about $5 per radio station for promotion for each artist, which includes sending mp3s or physical albums, band merchandize occasionally, email blasts to various radio stations with stellar write ups and recommendations, and the potential to be charted with College Music Journal (CMJ).

The latter is dependent on the music directors and DJs at each station "adding" the album to a chart. Being further charted involves the DJs making sure the album gets airplay. The more airplay on more stations, the higher the album is placed on the charts.

To formulate a list, begin with the Top 20 Princeton rated "Most Popular College Radio Stations". Some stations decide not to accept music not affiliated with promotion companies or CMJ for airplay, but do use the submissions to book local artists to play on campus or do on-air interviews.

Sending a physical copy will absolutely grab the most attention, but most college radio stations do at least listen to those extra submissions.

Whether promoting oneself independently or with the aid of promotional services, be sure to extend the offer of going the extra mile to entice college radio music directors. Offer to do station IDs (short recorded clips, i.e. "This is Joe from The New Band and you're listening to WXYZ 88.1FM"), on-air interviews or on-air performances.

3. Have an online presence with social media

Facebook, Twitter and YouTube quickly help Music Directors and DJs learn about your band. Also, be sure to have more music available on services like SoundCloud or Bandcamp. This validates a songwriter or an artist and gives the radio station an idea of the their popularity.

In addition to having the presence, each site must be current and maintained frequently to show that as an artist you are doing everything you can to spread the word about the music you are making.

Social media also makes for great informal connection with radio stations (who often also have these sites), their DJs and subsequently their listeners.

Want to get paid your royalties from radio? Songtrust makes it easy.