An Introduction to Cloud-Based Music Services

For many of us in the music industry, ‘cloud-based music services’ have been an interesting topic of conversation for the past several months.  There is an astounding level of curiosity and buzz for not only tech-savvy, music users across the world, but also labels, publishers, artists and songwriters.  But what exactly do cloud services mean for the music industry?  At this point, it really is too early to tell – but what we do know is that ‘cloud music’ has arrived.

The term, ‘cloud-based music’ is referring to a way of storing, managing and accessing your music collection through a digital storage space online.  This storage space (often called a ‘cloud’ or ‘music locker’) would allow users to transfer their entire music collection to one secure site, which would be able to be accessed from anywhere at any time - all you would need is an internet connection.

Up until now, when you would purchase music (such as downloads), you could only play it on that device.  Sure you could move your music, but this would require transferring the music by burning a cd, using a flash drive or sending large e-mail files of music.  Cloud Music services, like the one Amazon.com has just launched (Cloud Player), allow you to organize your entire library of music and access it as you wish.  Whether you’re walking around with your smart phone, sitting in front of your computer at work, at a friend’s house on his laptop, etc. – you will be able to pull up your entire personal music collection, just by logging in.

Amazon’s service will also allow its users to instantly send music that’s been purchased from Amazon directly to their personal music cloud – while also allowing for manual uploads from iTunes libraries or other music sources.  Currently, Amazon’s Cloud Player allows up to 5GB of free storage (or roughly 1,000 songs) and gives you the option to upgrade the size of your cloud by purchasing storage plans, which start at around $20 per year.  There are also a few perks that Amazon is throwing out there as well – all purchases made from Amazon will be stored free, and there is a promotion that allows 20 free GB for a year to any customer that downloads a full digital album from Amazon. There’s also a rather lengthy ‘Terms and Conditions’ that you must agree to, which can be found here.

Now… logistics aside, let’s apply this to the real world.  I have a music library of about 8,000 songs on my personal computer at home and I have the luxury of working in an office where listening to music is highly encouraged, if not required.   Anytime I would want to bring in music, I would either put it on a flash drive, or e-mail it to myself through file sharing sites like YouSendIt.com - which generally takes some time.   For me, a cloud service appears to be the practical answer I'm looking for.  To figure out just exactly how Amazon’s Cloud Player works, I decided to take it for a test-run.

The first thing I needed to do was log in to my Amazon.com account (new users would be required to create a login/password).  At the top left of the Amazon homepage there is a link that reads MP3’s & Cloud Player for Web.  I followed the link and started creating my ‘cloud.’  Amazon’s Cloud Player instantly began scanning my computer for music and notified me of the results. 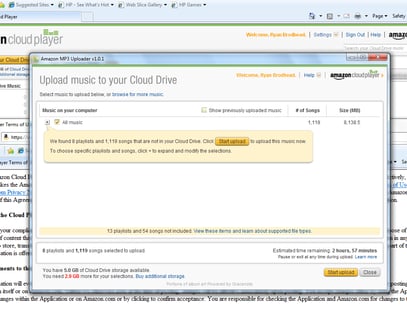 After scanning my computer, I was informed that I had 7.9 GB (1,119 songs)  available for upload (2.9 GB over the standard – and free – storage space).  I was then prompted to either buy more storage space, edit what I wanted to upload or just upload everything that would fit.  I decided to manually edit my selections and was re-directed to the ‘Upload’ page, where I was then able to pick and choose the specific music I wanted to upload, which would fit within the 5 GB storage space. 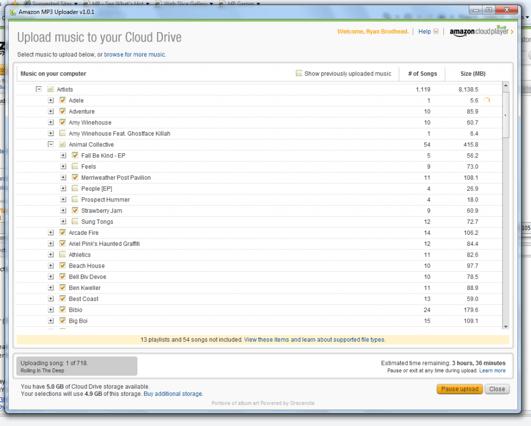 At this point I began uploading my songs to the cloud, which took some time (about 1.5 hours for 5 GB of music).  When the upload was complete I was directed to my new personal ‘Cloud Player’ library.  Here I found my collection of songs, all organized by artist, album, genre and song – available for either streaming or download.  You can also create your own personal playlists in the cloud as well.  When I got home from work, I immediately logged into Amazon to access my uploaded library from a different computer and there it was – ready for listening. 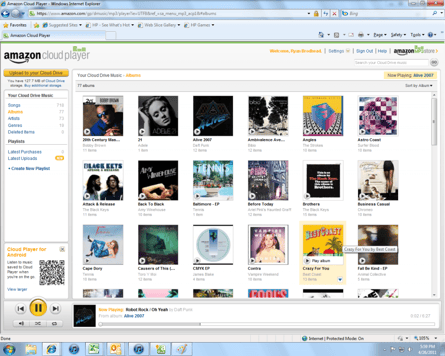 What’s going to be interesting is how both Apple and Google attempt to compete with Amazon, and how their cloud services will differ.  Being that this is such a new service, there are bound to be some bugs and glitches – which have already plagued Amazon.  This past week Amazon’s Cloud Player experienced outages caused by connectivity and latency errors.  The outages were corrected, but shined a light on how susceptible to errors these new services will be.

While Amazon was the first in the race to launch a cloud-based music service, Apple and Google aren’t that far behind.  Just this month, Google registered dozens of ‘cloud-related’ domain names including GoogleThunder.com, GoogleLightning.com and GoogleNebula.com.  Meanwhile, Apple has been inking licensing deals with major labels like Warner Music, in preparation of their cloud service launch.  The Apple service is also widely rumored to have an initial free period, but will ultimately cost either a monthly or annual fee.

On the surface, it seems that Apple has been doing their homework by reaching agreements and terms with labels and publishers – something Amazon has yet to do.  After facing legal threats, Amazon is now having to go back and strike up licensing deals with several music companies to avoid further scrutiny.  Not surprisingly, there have been many legal challenges surrounding cloud-based music services.  For starters, Amazon never consulted ASCAP or BMI, two performance rights organizations that see this service as a way to avoid paying songwriters, composers, artists and publishers for their content.

A similar music storage site, MP3Tunes.com, is currently being sued by 14 publishing companies and record labels for copyright infringement – mainly for allowing users to store unauthorized downloads.  However, there “still hasn’t been a square decision saying it’s lawful to store copyrighted songs,” says copyright attorney Jim Berger.  “There is still some debate that it’s not necessarily considered a fair use to share and make copies of content for personal use.”

Despite the ongoing copyright and legal discussions, cloud music does appear to be in our immediate future – and with the rise of these services are coming other complimentary companies.

Take for example, RealNetworks’ Rinse –a new service dedicated to cleaning up the metadata in its customers music libraries.  Rinse labels itself as a ‘song organizer’ that adds album artwork, corrects misspellings, deletes duplicates, renames genres, etc.  As we all know, the major problem with our music libraries is that, for the most part, they are disorganized and messy.  Some songs were burned from cd’s, some were downloaded from P2P sites, some were bought from iTunes, etc.  As we’re entering a world where all of our music can be stored and accessed from cloud service, the need to categorize existing libraries has a much higher importance that it previously did.  The software can either fix entries automatically or allow its users to edit proposed changes.  Rinse costs $40, works with both Mac and PC’s and comes with a  free trial for up to 50 tracks.