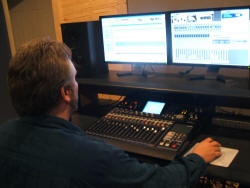 For this week’s post, we spoke to music renaissance man Abe Seiferth. Abe has worn many hats in the industry, including musician, songwriter, producer, engineer, and studio manager. In addition to running his own studio and managing DFA Records’ Plantain Studios, Abe is also an instructor at DMX Audio School, where he has taught MIDI, engineering, composition, and microphone science to aspiring producers and engineers. It’s no surprise, then, that he has a wealth of advice to share with songwriters looking to record demos. Many thanks to Abe for being generous with his knowledge.

Keep It Simple
This golden piece of advice applies just as much to songwriting as it does to the recording of songs. “One of the biggest, and most avoidable, mistakes made by songwriters is making things far more complicated than they need to be,” says Abe. “If you keep it simple with the parts, arrangements, and layers of your song, that’ll make your demo sound infinitely better.” The simpler your approach, the less likely something will go wrong.

Use Skilled Musicians
Though you may want to avoid the added expense of hiring session musicians, it’s amazing how much better the instrument sounds by someone who can play it well. “The signal chain in a quality recording goes in order from the source: musician to instrument to microphone to preamp to recording interface to computer. With the computer being the least important thing,” says Abe. When you have good musicians playing good instruments, it doesn’t matter where you place the mic or what kind of computer you use.

Quality Over Quantity
When it comes to purchasing equipment to record demos at home, it’s more important to have “one good of everything” than to have a wide array of the same item. For microphones, which are essential for a demo that emphasizes a song’s vocals, it is better to have a decent all-around mic than a handful of cheaper specialty mics. For instance, Neumann’s TLM 103, AKG’s 414 condenser microphone, and Sure’s SM58 are good all-around microphones that can be used at home to record quality demos, says Abe.

Be Cheap
There’s no reason to spend a ton of money on fancy studios or expensive equipment just to record a demo that will be re-recorded anyway. Aside from computers or computer-related gear, buying things used is a sure way to knock a lot off an item’s original price. Craigslist and eBay are good resources for thrifty musicians looking to buy anything from ergonomic Aeron chairs to discounted amplifiers, suggests Abe.

The Song Is Supreme
Perhaps the most important point, though, is to remember that the song is more important than the demo. Since the primary purpose of your demo will be to raise your profile as a songwriter and to get your song placed with other artists, “don’t get too caught up in the details of making a perfect, glossy demo,” says Abe. That’s a sure way to take resources away from the song itself and expend them on less important things like a radio-ready demo. After all, your demo is a rough draft that will likely be re-recorded anyway, so focus most of your energy on writing the best song you can.