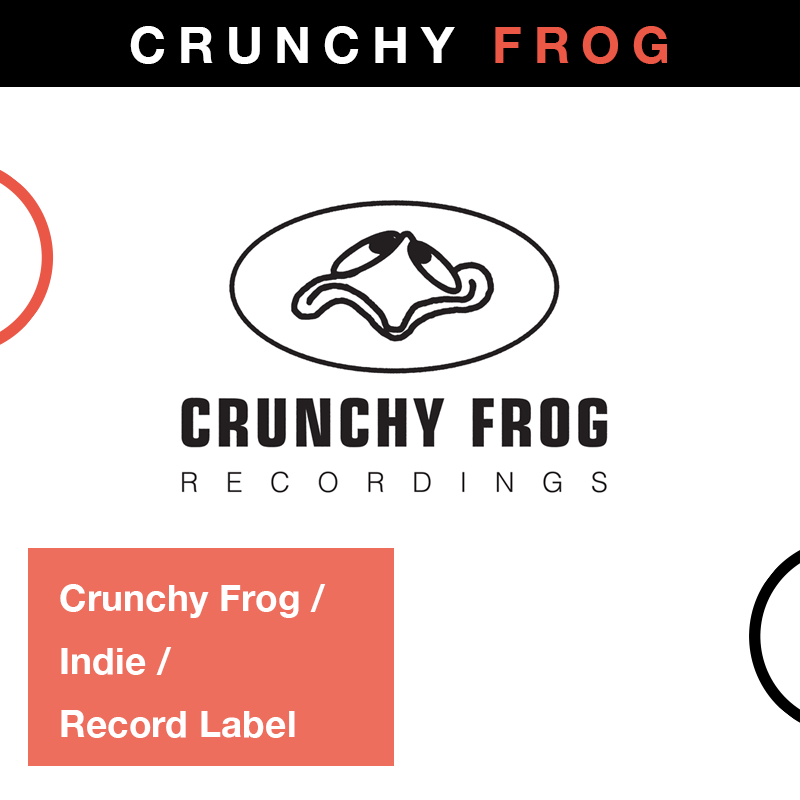 CRUNCHY FROG RECORDINGS is an independent record label based in Copenhagen, Denmark. It was founded in 1994 by the four members of the band THAU.  Though no longer underground, the philosophy remains the same: Releasing quality alternative music giving bands full creative control.

In case you were wondering, yes, the name of the label is borrowed from a Monty Python sketch involving a pair of policemen who question the head of a confectioners about his new product, "The Whizzo Quality Assortment", which includes "Crunchy Frog".

Since 2016, we have also been partners in three bars in the greater Copenhagen area, Whammy Bar, The Mudhoney and Crane Brothers. Both the look, taste and of course sound is tastefully designed for maximum crunchiness. If in town, don’t be a stranger!

What is Crunchy Frog’s origin story?

Crunchy Frog was founded as a Copenhagen indie label by the four members of THAU back in 1994 for the release of their debut album, “Utah”. The same four (now slightly older) kids still owns the label, two of them working at our HQ on a daily basis. Initially, it was all lo-fi noise rock, but adding bands like Superheroes and Junior Senior, the frog leapt into indie pop - and onto a much larger stage. Further adding more retro-sounding bands like The Raveonettes, PowerSolo, The Tremolo Beer Gut and D/troit, it ended up being a three legged frog. So far, we’ve released a total of a little more than 30 different artists, mainly Danish, but also a small handful of Swedish acts, an Icelanding and a US band. As you can tell, we’re pretty picky, because if the next album we’re putting out isn’t the greatest thing recorded in human history, why bother doing it?

How does Crunchy Frog’s philosophy differ from other labels?

We aim to release quality music in the area of alternative pop and rock under the conditions of full creative control for the bands. Since we started out as musicians, we know how much that counts. The important thing isn't always the bottom line and the $$$, but that we are able to maintain our self proclaimed position as the most interesting indie-label around! And not just around our native country of Denmark: Crunchy Frog is the best record label in the Universe! Ever!! Also, we still only do 50/50 deals with the artists. We’re in it together, for better or worse. There are other fine labels that has the same ideals and M.O. but…well, we also have 3 bars and our own beer and wine.

What qualities do you all look for before signing a new band/act?

We’re always intrigued if a new band knows what they’re doing. If they have an artistic vision and a personal take on the long history of popular music. If you can’t invent it, then re-invent it on your own terms. And please keep it a little rough around the edges. And no reggae, sorry.

Don’t wait around for someone to pick you up - just do it! If you do it with passion and skill, they’ll come around. DIY still rocks!

What is the value for artists to be signed to a label?

We’re usually very much involved in the entire creative process, from recording to artwork, and of course we handle the usual label stuff distribution, promotion, marketing, exploitation - and everything in between. On top, we’ve specialized in synchronization, working with partners around the world trying to place the recordings where the $$$ are.

You’re coming up on your 25th anniversary (congrats btw!) - what do you attribute most to your success?

All the amazing artists we’ve had the honor and pleasure of working with! And staying true to our philosophy, combined with a lot of hard work and all the great people we’re collaborating with worldwide, helping us making the world a little bit crunchier.

What kind of exposure do you feel makes the most impact for an artist/songwriter?

What you learn after 25 years is that there’s no one way of doing it. It still feels like we’re making it up as we go along. Sometimes it’s playing the right show in front of the right people, other times it might a video exploding on SoMe. Other times the right sync placement really can make a difference. Still, it all comes down to exposing people to the music itself. Which straw that broke the camel’s back is sometimes hard to understand - and always impossible to predict.

How do you think the music industry has changed for artists/songwriters in the last 10 years, and what do you think still needs to change that can ultimately benefit artists?

The rise of digital distribution and the decline of physical sales is the most obvious game-changer. Still, the major labels are making the calls, and no doubt, the cards are stacked. As stated by legendary US indie label SST: Corporate rock still sucks! We just have to navigate these waters. But worldwide digital distribution and promotion and social media makes it possible for a good band to be heard.

We have our 25th anniversary as a label and publishing company coming up this year. Hence, we've asked the 16 active bands on the label to record a new song. They'll be released as stand alone singles (first one will be out in April) and finally compiled on a vinyl album set for release in September to coincide with our big anniversary party. Come to the party, and you’ll get a free copy!

How has Songtrust helped Crunchy Frog?

We trust Songtrust to help us help the songwriters get their $$$. That’s the whole point, innit?