A collective management organization, or CMO, is a non-profit organization responsible for registering, tracking, and collecting publishing royalties after they’ve been earned, and paying them out to their respective songwriters and/or publishers. Each CMO operates within a specific country or territory, and they may vary in terms of the types of royalties they collect. Unlike Performing Rights Organizations (PROs), which focus on performance royalties, most CMOs collect both performance and mechanical royalties.

To be classified as a CMO, an organization must be owned and operated by the creators it represents; open to all creators in the rights category it represents; conduct its business in a non-discriminatory manner; represent a broad range of exploitations/usages; and be authorized by law to operate as a CMO where applicable.

A few examples of CMOs include ABRAMUS (Brazil), GEMA (Germany), SACEM (France), and SUISA (Switzerland). There are also companies and organizations that don’t fit under the CMO bracket but still collect both performance and mechanical royalties. We like to refer to these as Rights Administrator Entities (RAE). A few examples of RAEs are ICE Services and Music Reports (MRI).

Can You Give Me an Example?

You are a songwriter in the United Kingdom and regularly write and perform cover songs in pubs across the U.K. You're about to release your first album, which you also plan on performing live.

To ensure your setlists and the new songs on your upcoming album are tracked so you can collect royalties off them, you need to affiliate your songs with a collection society such as a CMO. In the U.K, this organization is called PRS/MCPS. Since their purpose is to organize copyrights and pay rights owners royalties when they are due, and you expect your songs to be used more and more, you become a member of PRS/MCPS.

To learn more about CMOs and other music publishing terms, head over to our Glossary for additional articles and resources. 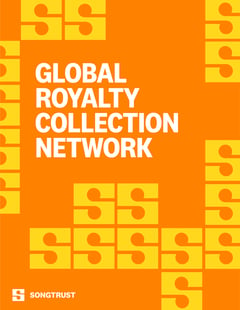 Where does Songtrust collect royalties from? Find out the specific countries and territories we cover, and the royalty types we collect from them.