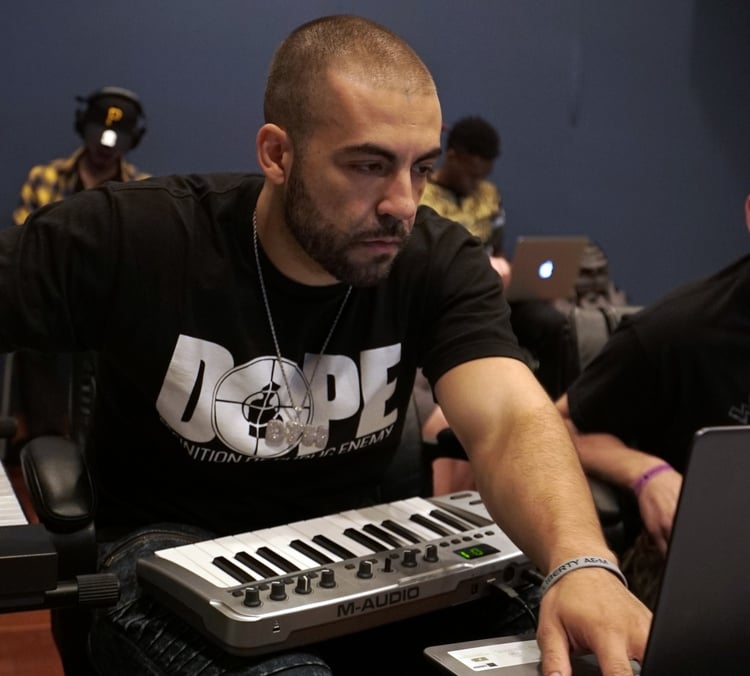 DJ PAIN 1 is a platinum producer and DJ whose production credits include Jeezy, Ludacris, Rick Ross, Pusha T, 50 Cent, Public Enemy, Meek Mill, 2 Chainz and many more. He is also a founder of the Music Entrepreneur Club, sharing experiences and information with fellow creators and producers. How did you get your start in the music industry?

I basically decided to focus on the goal of becoming a professional producer, which, at the time, meant working on a major label project. I first spent a year building up my catalog and making a habit of creating and finishing beats. Then, I researched and networked the following year and luckily ran into an aspiring producer manager named Brendan who sent one of my beats to an engineer who was working with Young Jeezy. That beat became a song on Jeezy's number 1 selling album "The Recession" called "Don't Do It"

What and/or who influences your creative process?

My peers really influence my creative process in terms of inspiration -- whether I'm working with them or just feeding off of their energy. My environment affects my process too. I either like working in quiet by myself or in a musically chaotic group environment where everybody is collaborating and exchanging ideas.

When creating beats that other creators will use, do you discuss with them and adjust for their needs or do you try to match to the creator after they are created?

Different scenarios require different approaches, so I definitely do both. What advice do you have for up-and-coming DJs who are trying to make it in the industry?

To the up and coming DJs I would say: create a culture around your events. Yes, DJs are meant to play music that suits the crowd, but dominate a niche that you love first and become the most insightful and responsive DJ in your area for that particular niche. For example, if you want to be the number one rap DJ in your area, learn how to read the rap crowd, learn the songs that transcend generations as well as the newer and current hits. Then, once you've built your positive reputation, expand into other genres. What advice would you give to creators seeking collaborations with other artists?

Collaborations are great ways to make great music and network. Not everybody is meant to work with you though. If a collaboration makes sense to both parties, it will likely be fun and successful. Don't try to collaborate with another creator if you only want to take advantage of their platform, connections, or perceived fame. If you are trying to collaborate with a total stranger, start with conversations -- listen to their music, tell them what you like about it, make them aware that you exist. Then, some time down the line, broach the subject of collaboration.

You have a popular Youtube channel and are part of the Music Entrepreneur Club, what inspired you to start making educational videos and sharing your own experiences with other creators?

I was working for a college pipeline program for students of color at the University of Wisconsin. Music production was one of the topics I was teaching and I started making videos (also to learn basic video production, another class I was planning on teaching) to send to my students in between sessions. I just uploaded them to YouTube and found that I was getting hundreds of thousands of views. I think I was one of the first people making beat tutorials. This was around 2006. I didn't plan on being a YouTuber.

Music publishing can be confusing -- why did you choose Songtrust and how have we, if at all, helped you as a creator?

When I learned that Songtrust collected from international PROs as well as from the Harry Fox Agency, I joined immediately. Collecting mechanical royalties, which are being generated off of streams, is nearly impossible for unsigned artists. The HFA system is incredibly inaccessible and difficult to navigate. And collecting foreign performance royalties is even harder. I was missing out on money owed to me just because I didn't have a publisher like Songtrust collecting on my behalf.

What goals or upcoming events do you have planned for yourself -- either personally or professionally?

I'm really excited about all the music I've been making with my team of musicians, the Vintage Vandals. We have been working on a lot of tracks that ended up on albums by Logic, Wiz Khalifa, Bun B and more. A lot of that was in collaboration with Statik Selektah. What would you like to see change in the music industry or would like creators to be more aware of as they are building our their own careers?

I would like to see the culture of helplessness be replaced by a culture of learning. There's so much information out there to guide aspiring musicians and creatives towards building their careers the right way. Yet, I see so many creatives-- musicians especially-- making the same mistakes, over and over, and claiming they don't know any better. They could literally search "what to post on social media and when" or "how to sell beats online" and find really specific and well-researched answers, but somehow this culture of helplessness leads them to make up their own strategies or follow ineffective strategies. That's why scammers are taking advantage of artists left and right, charging them to add their songs to playlists with fake subscribers or for articles written in online magazines with no readership. It's also why we're seeing comments like, "My boss thinks you sound great, dm him now" or "I'm a 17 year old artist, please listen to my new single, link in bio" on RIP Instagram posts.

What is your favorite song or artist to listen to right now?