The Basics of Sampling and Covering Songs

Conceptually speaking, covering and sampling music can be considered two sides of the same coin. Covers involve the intellectual use of pre-existing material — a reinterpretation of an existing composition that creates a new recording — and samples recontextualize sounds from an existing recording in a new composition.

The legal ramifications for songwriters and music creators are entirely different, however. In this article, we’re going to treat them as similar but distinct subjects. By the end, you should have a clear understanding of how copyright law handles covers and samples, and how this might affect your publishing royalties.

While some artists will never cover another songwriter’s work or employ any pre-existing music, it’s a common practice. So it’s important that you know the upsides and downsides of both approaches before you start building sample-based tracks or recording cover versions of existing songs.

“As a songwriter, you have an umbilical cord to the song and it's hard to expand on your understanding of the lyrics. Whereas when you cover a song, you can create your own reason why you're attached to it.” — k.d. lang

Many recording artists view covering songs as a mainline back to an emotional moment or experience — a way to tap the creative current that powers all songwriters and artists. As k.d. lang so succinctly expressed, they’re a way of reframing what’s been already said through the lens of your own experience.

Since the very notion of covering songs has such a well-established history — from classical to jazz to folk music — the legal procedure for properly recording and releasing them is fairly straightforward. If your cover song is a fixed digital and/or physical release that doesn't fundamentally change the lyrics or melody of the original composition, you need to obtain a mechanical license from its owner(s). Luckily, this license is compulsory in the U.S.; in other words, the rightsholder doesn’t have the option of rejecting it.

If you merely want to perform someone else’s work in a live setting, you don’t need to obtain a mechanical license. The venue’s owner is responsible for purchasing a blanket performance license instead.

A similar rule applies to cover songs released only on streaming platforms like Spotify and Apple Music; they do not require a separate license because they are already covered by a blanket mechanical license agreement with publishers.

To obtain a mechanical license to record and release another creator’s work in physical or download form, you’ll most likely go directly to the owner of the composition, their publisher, or a third party like the Harry Fox Agency (HFA) or Easy Song Licensing in the U.S. You can also search for the publisher in collection society databases or initiate a formal Notice of Intention procedure for a compulsory license through the U.S. Copyright Office.

Please note: Calculating rates for interactive streams is a much more complex process outlined by the U.S. Copyright Royalty Board. However, as we mentioned earlier, blanket mechanical licenses are typically acquired by the platforms themselves. For example, Spotify deals with The Mechanical Licensing Collective (The MLC) directly. The non-profit was launched in 2019 to administer blanket mechanical licenses to eligible streaming services and pay the resulting royalties to songwriters, composers, lyricists, and publishers.

Why Do I Need a License?

As the name suggests, the term “mechanical license” refers to a physical reproduction of music. This dates back to the 19th century when sheet music publishers believed that automated player piano performances violated copyright law. While they initially lost the case, lobbyists for the music industry successfully petitioned Congress to enact the Copyright Act of 1909. It has been updated to reflect current technology ever since then.

Another unique aspect of mechanical licenses is that they cover a specific number of copies, whether they’re physical items like vinyl records or digital downloads. In other words, when you apply for the mechanical license for a particular song, you’ll obtain it in set increments such as 100 or 1000, depending on the number of physical copies or downloads you expect to sell. In the U.S., you may be compelled to obtain and pay for the mechanical license upfront; elsewhere in the world, it’s typically paid upon the purchase or download of a song.

Regardless of how popular the song you’re covering is, the rate you pay per license doesn’t change when it comes to digital downloads and physical reproductions in the U.S. The current statutory mechanical royalty rate for physical copies and permanent digital downloads is 9.1¢ for recordings of a song five minutes long or shorter, and 1.75¢ per minute (or fraction thereof) for any recordings over five minutes. 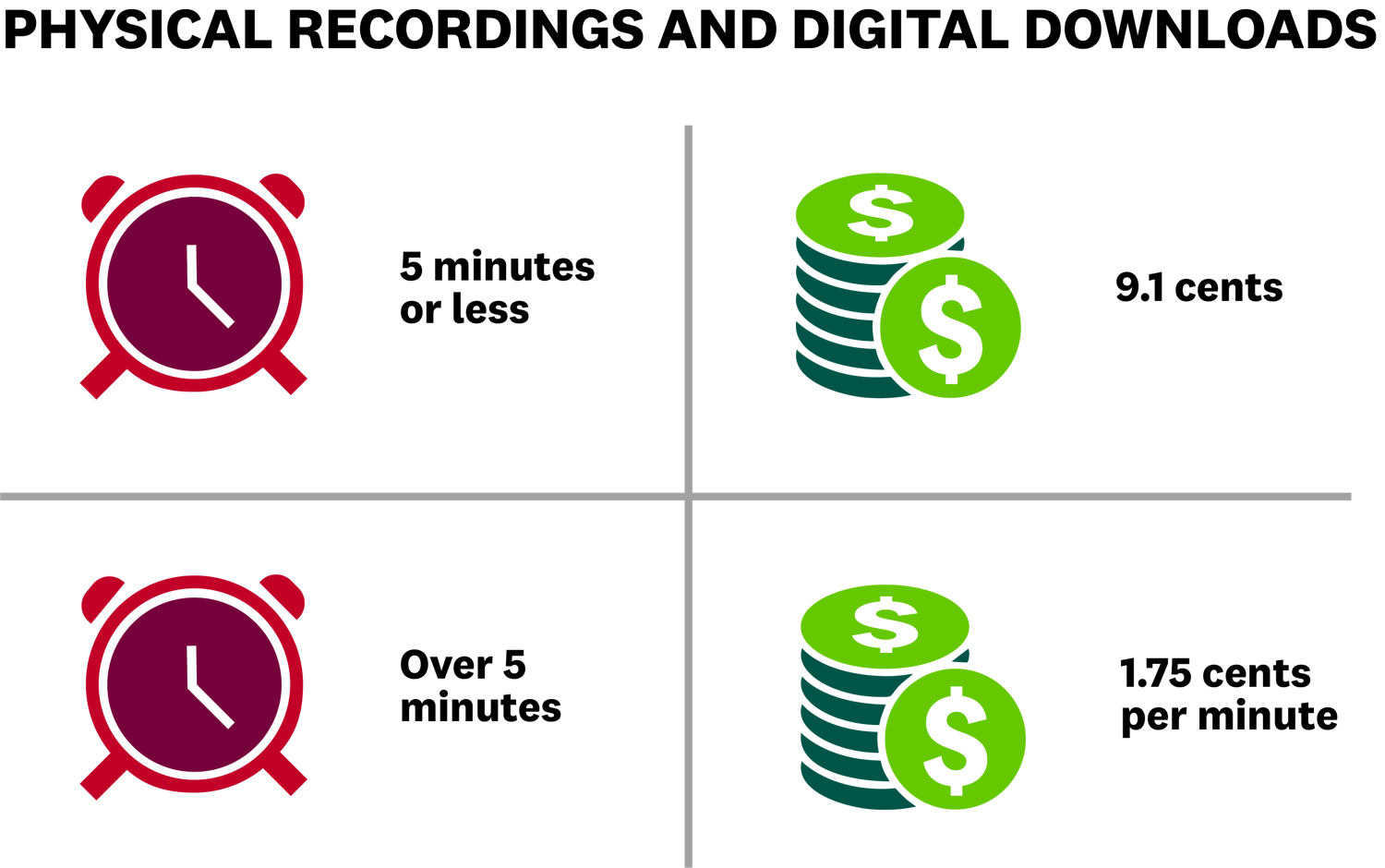 That’s good news. Remember: Regardless of whether you sell, give away, or completely forget about your version of the song, you’ll need to obtain a mechanical license for each physical or download a copy.

One final word of advice: While some licensing agencies promise turnaround times of a business day or two, it’s not always that simple. Bart Day, a longtime Pacific Northwest attorney specializing in music law, has this to say:

“Don’t wait until the last minute before your record release! It can take some time to get the necessary documents signed, especially if you need to deal directly with the music publisher. And mechanical license documents often require that the credits read in a certain specified way, and you’ll need to know what that text is so that you can have it printed correctly in your artwork for the record.”

So once you know you want to release a cover song, start the licensing process immediately, to ensure you’re not stalled at the vinyl pressing plant by missing paperwork.

A Sample of Sampling Law

“Listening to the stuff on the radio today, you'd think rap is one big sample. That's an insult to all of us who've been here from the beginning…. Be creative — learn the craft. Don't just throw something out there over somebody else's beat. Some of us work hard to make the art form something people can respect.” — Dr. Dre

While it has a shorter backstory, sampling — the use of another artist’s actual recording — is a major part of mainstream and underground music today. Sampling hit the mainstream via its use in hip-hop, but artists from all genres use samples.

Whatever your take on using samples, we’ll start by getting the bad news out of the way first: It’s much more difficult to get samples cleared than it is to obtain mechanical licenses for covers.

Unlike cover songs, licenses for samples of sound recordings aren’t compulsory. This means the rightsholders can outright refuse to clear a sample, or demand a significant advance and/or percentage of sales.

In order to legally use a sample from a copyrighted song in your own music, you need not one but two different licenses. One is for the recording (which is usually controlled by a record label or the recording artist). The other is for the usage of the underlying composition, which — much like with cover songs — is controlled by the publisher or songwriter.

In order to clear a sample, you’ll need to contact the publisher of the original composition and reach an agreement. You’ll also need to find the owner of the recording, which can be difficult, especially since record labels — both major and independent — can fold or change ownership throughout the years.

There are exceptions, of course. Some artists and labels actively support and encourage sampling, and new companies like TrackLib are also advocates for making samples easier to obtain. Some producers will even actively promote sample packages for you to buy and use.

That said, getting samples cleared can be difficult, time-consuming, and expensive.

When You Fight the Law and the Law Wins

With a legal landscape this challenging, it’s no wonder that some artists still flout copyright laws by incorporating uncleared samples. We don’t recommend or condone such practices, but we also can’t deny that they occur.

Results can be mixed. Yes, many samples go unnoticed, either because they’re sufficiently altered to defy recognition, the original track is itself obscure, or because the artist using them is low-profile enough to fly under the radar - or for the rightsholders not to think it’s worth bothering with.

That said, hoping your music won’t be popular enough to attract the attention of producers and record labels is counterintuitive. British band The Verve learned this the hard way when they had to forfeit all of the royalties for their platinum-selling 1997 single “Bittersweet Symphony” because it incorporated an uncleared Rolling Stones sample. (The Rolling Stones magnanimously handed over their publishing rights to “Bittersweet Symphony” to The Verve in 2019, though at that point most of the publishing royalties had already been earned.)

Recording cover songs — or including too many of them on one release — is risky as well. Soft Cell’s version of Gloria Jones’ “Tainted Love” was a worldwide smash, and the top-selling UK single in 1981. Unfortunately, the band chose another cover, the Supremes' "Where Did Our Love Go,” as the single’s B-side, guaranteeing they would earn nothing in songwriting or publishing royalties from sales of the single.

Whichever route you decide to take, our hope is that you base your decision on a solid understanding of the legal implications. We want you to find your inspiration, follow your muse, and sing to your heart’s content. We just want you to do it legally.

We can't provide legal advice, but we can urge best practices and proper procedures when it comes to licensing and registering songs. If you register a song on our platform that contains a sample that hasn't been properly cleared, you're liable for any legal repercussions.

Five Publishing Royalties You May Be Missing Out On