How Spotify Streams Turn Into Royalties

In the decade since its U.S. launch in the summer of 2011, Spotify has become the world’s leading music streaming platform, with over 345 million active users and 150 million subscribers globally.

In today’s market, it’s vital for creators to understand how streams turn into royalties. In order to fully reap the financial benefits of your music, we’ll show you how a stream on Spotify turns into publishing royalties, and how to get those royalties into your pocket.

At the highest level, a song can be thought of as being split into two halves: the sound recording itself and the composition (the underlying song, like its lyrics and melody). When your song is played on a streaming service, recording and publishing royalties are both generated.

If you are a songwriter and/or publisher of a song that is available on streaming services, you’re entitled to these royalties. For the purpose of this article, we’ll focus specifically on the publishing royalties earned by compositions on Spotify. (While other digital streaming services follow the same basic structure for earning royalties, the pay rates may differ.)

What Are Streaming Royalties?

Performance and mechanical royalties are both generated when your song is streamed on a digital service like Spotify because a music stream is considered both a public performance and a mechanical reproduction of your work. The payout on a Spotify stream varies based on what country and kind of user (premium, free, family, student, etc.) are streaming the song.

Depending on the service, you may earn different rates for performance and mechanical royalties per stream. These rates are set by different entities. In the U.S., mechanical rates are set by the Copyright Royalty Board (CRB). Performance royalty rates are primarily set through negotiations between Spotify and your Performing Rights Organization (PRO). In order to capture these royalties, you’ll need to affiliate and register your song with the appropriate collection societies.

The public performance, broadcast, or stream of a musical work generates a performance royalty for the songwriter and publisher. If your song is placed on network or cable TV, played on broadcast or satellite radio, or distributed on streaming services like Spotify, you’re entitled to collect performance royalties.

Performance royalties are tracked and collected by collection societies — PROs like ASCAP, BMI, and SESAC in the U.S., or Collection Management Organizations (CMOs) such as GEMA in Germany or ABRAMUS in Brazil. For anyone new to publishing, Songtrust can streamline the process by affiliating with a society on your behalf and ensuring your songs are globally registered.

Performance royalties are based on each songwriter’s ownership share. For example, if you play in a guitar-and-drums garage rock duo, and both members contributed equally to the song, you might agree to share the songwriting credit 50/50. However, in genres that often have many different contributors — like pop and hip-hop — you may encounter more complex songwriting share distribution.

You’ll also need to collect royalties when your song is streamed on Spotify outside of the U.S. These can be collected in two different ways — through your collection society’s reciprocal agreements with other societies or by using a publishing administrator like Songtrust. Signing up with us means having your songs registered with more than 60 global sources rather than relying on reciprocal agreements and the additional delays and issues they can cause.

Any time your songs are reproduced, whether physically or digitally, mechanical royalties are earned. For example, if you get a record deal and your album sells 10,000 physical and download copies, your record label will have to report these sales to you and your publisher, and then pay out mechanical royalties accordingly.

With digital services like Spotify, mechanical royalties are paid directly to a Mechanical Rights Organization (MRO), not a label or distributor. In the U.S., a songwriter must have a music publisher or administrator in order to claim mechanical royalties from an MRO, or sign up directly with multiple mechanical sources themselves. Because of this, mechanicals are often left uncollected. 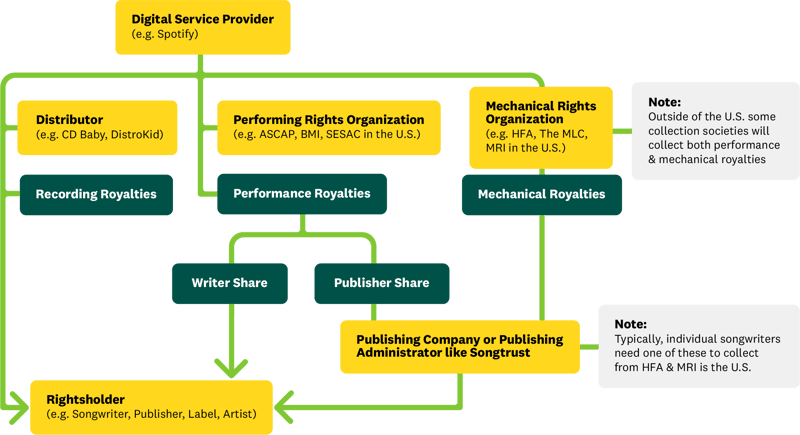 For example, The Mechanical Licensing Collective (The MLC) is the MRO in charge of distributing Spotify’s mechanical royalties and licensing their catalog in the United States. Spotify is legally required to license your work based on Section 115 of the U.S. Copyright Act. This is called a “compulsory license”; it essentially says that Spotify is mechanically reproducing your music on their platform.

Another important note is that HFA is only in charge of distributing and licensing Spotify’s catalog in the U.S. When your song gets streamed in, say, Australia, that money will be paid to AMCOS, Australia’s mechanical society. In order to claim these royalties, you’ll need to affiliate and register with the appropriate country your song is streaming in.

While DIY creators can do this themselves, you have to affiliate and register as a publisher with every mechanical society to ensure you’re collecting on all your streams. Or you can do it all at once with a publishing administrator like Songtrust. We’re able to collect royalties on your behalf worldwide, leaving you with more time to focus on writing and recording music.

Interested in seeing how much more your song could be making by collecting your publishing royalties? Check out our estimator tool. 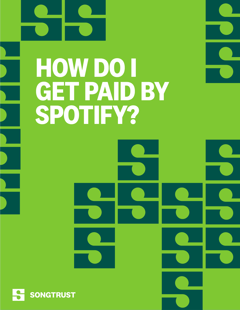 HOW DO I GET PAID BY SPOTIFY?

Your song is streaming on Spotify. Now find out how they pay out and make sure you're set up to collect all of your streaming royalties.