As a songwriter, you know that a song has a number of elements including the intro, verses, chorus, bridge, and coda that all work together to make a compelling musical whole. When it comes down to actually getting paid for your distributed song, there are additional elements working behind the scenes to earn you money.

One of the most important concepts to understand in music publishing is that there are two separate and unique copyrights that reside within each recorded song, aka two halves of a song. Knowing how these two separate halves co-exist is essential to understanding how they each earn unique types of royalties for the use of your song.

Two Copyrights: The Composition and the Master Recording

Before we dive in, let’s be clear on just what we mean by “copyright.” As we’ve written before, a copyright is a bundle of rights granted to an author of an original creative work that has been fixed in a tangible medium, such as written out or recorded in demo form. 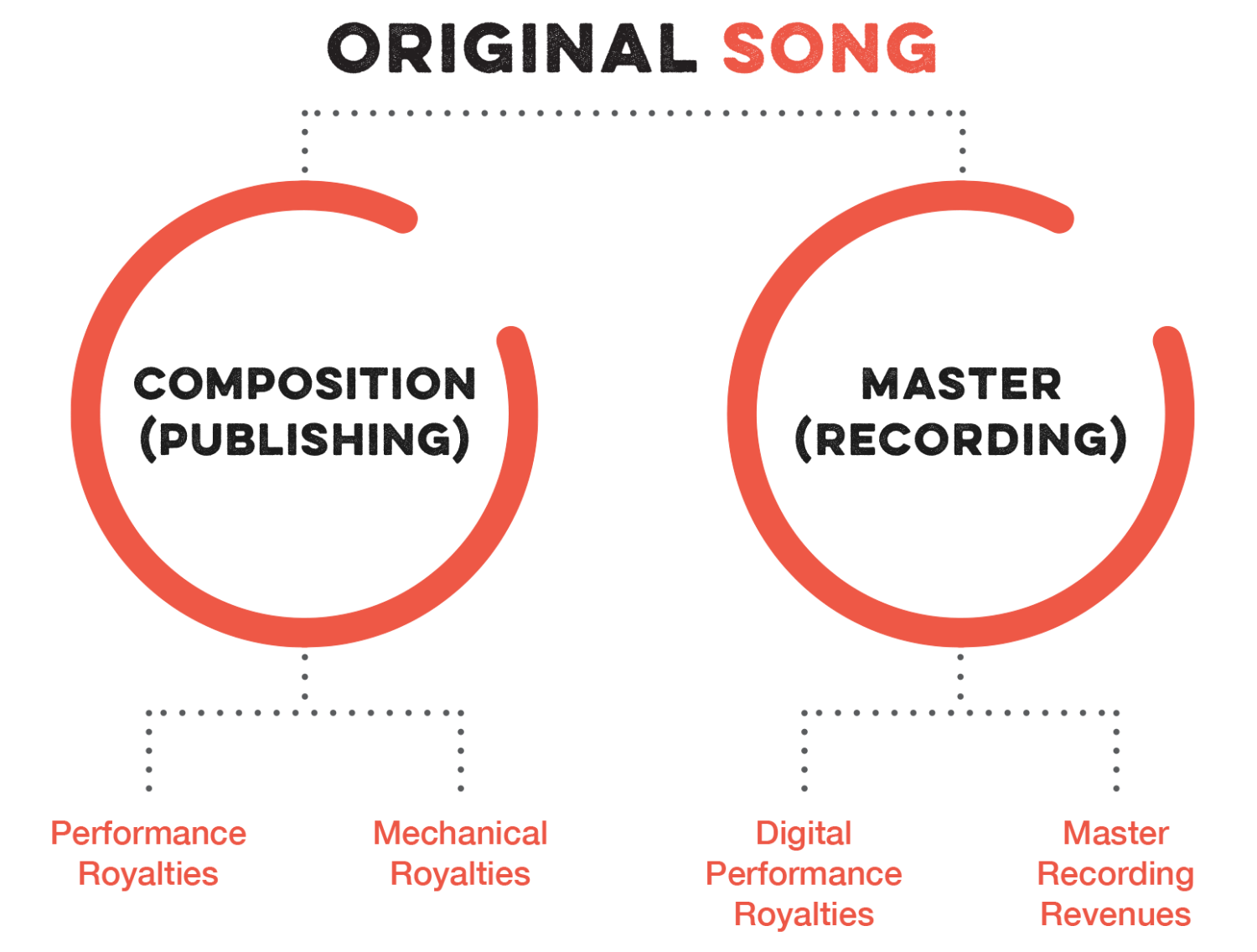 Every song is divided into two halves: the composition and the master recording. The composition is the original idea of the song put in some tangible form. It could be a simple recording you make with your smartphone, or the lyrics and chords of the song written out on paper.

It’s true that once you’ve initially captured or recorded a song, whether on paper or in an audio file, you are automatically the owner of the copyright in that song. That said, there are some strong incentives to registering your song with your home Copyright office. Our Copyright 101 primer goes into these considerations in greater detail.

How Each Copyright Earns You Royalties

How exactly do these two kinds of copyrights generate money from your work? It depends on which copyright you hold.

As the originator of the song, it's the songwriters and their publishers who generally hold what are called performance and mechanical publishing rights, referred to collectively as “publishing” or “composition” royalties. Mechanical royalties are generated whenever your song is reproduced in any form, whether it’s a physical format like a CD or LP, digitally downloaded, or as an on-demand stream (e.g. Apple Music or Spotify). Performance royalties are generated anytime your song is performed publicly, such as in a live performance, broadcast or online radio play, over the speakers at a restaurant or retail store, among other sources. On-demand streaming earns a performance royalty in addition to a mechanical royalty, as it’s considered a performance as well as a reproduction These royalties are collected and paid out by your collection society, such as a performing rights organization (PRO) or collective management organization (CMO), your publisher, and/or your label.

Whoever controls the master recording, whether it’s a recording artist who is self-releasing, or a record label who has signed a contract with an artist, will work with a distributor in collecting master side royalties for streaming and digital downloads. Artists and labels will also be paid for physical copies sold, whether directly via their website or on tour at their merch table, or via a distributor who sells the physical product to retailers.

Another, much misunderstood royalty is owed to master rights owners: digital performance royalties (also known as neighbouring rights outside of the US). These royalties are based solely on the master recording of the song, not the composition of that song, and are earned when a song is played over satellite or online radio, as well as broadcast radio outside of the US. Digital performance royalties or neighbouring rights are paid out by different sources depending on where they’re earned. For example, in the US, these royalties are generally collected and paid out by SoundExchange and in the UK, these would be collected by an organization called PPL.

So, now that you know what kind of royalties each kind of copyright grants you, it should be easy to collect them, right?

How to Maximize Your Earnings

While the basic process is simple enough, ensuring you’re covered for global royalty collection can become more complex when you attempt to take on all the administrative responsibilities yourself. Even though you may be legally entitled to all the royalties associated with a given type of copyright, there is still a process that you must follow in order to have your royalties be linked to you and your songs.

Unfortunately, due to lack of knowledge or misunderstanding of the publishing timeline, as well as the difficulty in global registration, it’s not uncommon for these royalties to go uncollected. Ultimately, many songwriters miss out on quite a bit of long-term revenue.

In fact, that’s one of the main reasons we created Songtrust in the first place: To help songwriters and music creators access all the royalties they’re owed. Our publishing administration service is built upon low fees, transparent and flexible terms, and most of all, the idea that independent songwriters should be empowered to take control of their musical career.

If you have any questions about music publishing or Songtrust, reach out to our team at contact@songtrust.com.