Administration, Co-Publishing Deal, or Work for Hire: Which is Right for You?

You’ve heard the story before - a budding songwriter who dreams of making it big finally lands a deal from a reputable music company that then makes them famous. A lot of times these deals are thought to come in the form of a record deal, but there’s also the lesser-known music publishing deal. Music Publishing deals can vary widely but typically boil down to the offering of an advance and creative services, in exchange for some form of song ownership.

These kinds of deals are what a lot of artists aim for, but with the rising numbers of independent musicians coming into their own, a traditional publishing deal isn’t the only option anymore. Now songwriters have to ask themselves a variety of questions including: How much ownership and independence am I willing to give up for the benefits that a traditional publishing deal will give me today?

The industry can be split between which deals they believe in most, but there are some facts that can’t be disputed. First off, the moment you decide that the song you’ve poured your soul into is finally finished, you automatically own the copyright and 100% of your publishing ownership for that composition. Next, this 100% publishing ownership is divided into two very important pieces: the publisher’s share (50%) and the writer’s share (50%). These facts are so important because some publishing agreements take a percentage of ownership from your publisher’s share. Understanding that this ownership is yours from the get-go is crucial when making decisions about your career. 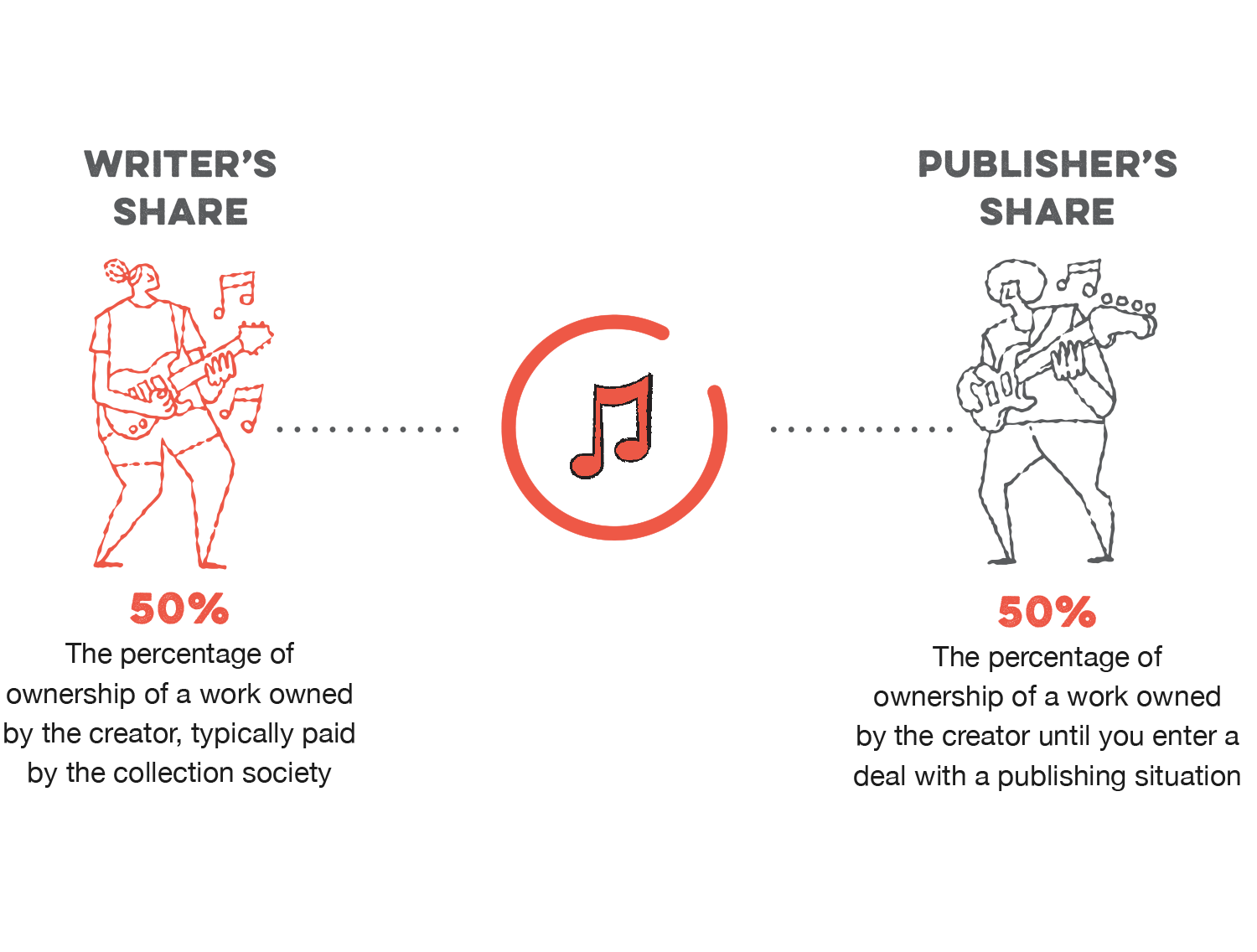 Let’s walk through the three main types of music publishing deals you might come across.

Administration agreements ordinarily do not include any creative services and focus solely on duties such as properly registering your songs with pay sources and collection societies around the world, as well as collecting royalties on your behalf. Most administrators will also process the paperwork for any sync licenses you procure, for a percentage of the sync royalty. This is called "passive" sync income. In some instances, administration deals can include an advance, which must be recouped in the same way as in a co-publishing deal (which we’ll explain further soon), meaning that before you are paid out any royalties, all of your advance must be paid back.

Publishing administrators have relationships with all kinds of performance and mechanical collection societies and pay sources around the world that make royalty collection much simpler than it would be for a single songwriter to do on their own. This leaves you time to focus on writing as well as to work on pushing your songs creatively.

At Songtrust, we’ve created a seamless publishing administration platform to help you register and collect all of your royalties worldwide, while retaining 100% of your copyright ownership. If this type of music publishing deal appeals to you, reach out to our team to learn more.

A traditional publishing deal generally means that you forfeit 100% of your publishing rights in return for the services that your publisher will provide. In a co-publishing agreement, one of the most common publishing deal for major songwriters, you typically give away 50% ownership of your publisher’s share ("co-publishing") when you sign. This means you still keep 100% of your writer’s share, but only 50% of your publisher’s share: 75% of your total publishing royalties. During your term, which typically lasts 1-3 years (usually with options for renewal), you have certain obligations, such as writing a minimum number of songs that are commercially satisfactory or that the songs must be recorded and released by an artist on a legitimate label, that must be fulfilled during your term.

Because the publisher takes partial ownership, they do have more of an incentive to support your compositions and generate royalties from them. They’ll do this in a number of ways:

In addition to this creative work, your publisher will also be doing all of the necessary administrative duties. Keep in mind that though you maintain part of your publishing ownership, oftentimes you still give up administrative rights meaning they may require the songwriter to give away external control over the song itself. This allows the publishing company to more easily seek out and agree to sync opportunities, but also means you may not be able to have a say in what those opportunities are.

Another enticing aspect of a co-publishing deal is the cash advance. Publishing companies will customarily offer you a sum of money, which varies depending on the deal, upon signing the contract. This can be alluring for a songwriter, because it offers a potential form of freedom such as quitting your day job and focusing all of your energy on writing. However, it’s important to know that this advance must be recouped in full by the publisher before you are paid out any royalties from your compositions. This means the publishing company will collect your 75% of royalties until they’ve recouped their advance. The other 25% goes directly into their pocket.  Also, though you retain 50% ownership of the publisher’s share, you are often giving away 100% of control over the song itself, meaning you have little say in how it is used or pitched. 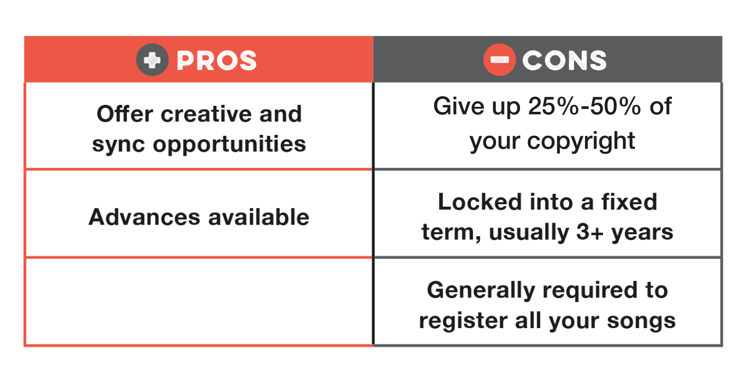 It’s important to know that these deals can be difficult to secure. Generally, you’ll need to have already had some success in the songwriting world and/or have relationships with music industry people who can get your work in front of a publisher. Even then, your songs have to be good enough for the publisher to invest their time and money in you. A co-publishing deal may be what’s right for you and your career.  But make sure you know what the terms mean, fully read the agreement, engage an attorney, and take your time before signing so you’re prepared to make better business decisions.

A work-for-hire agreement is a pretty straightforward arrangement. Many companies (not necessarily publishing companies) or individual songwriters may approach songwriters, producers, composers, etc to create unique composition(s) for their projects, which they then outright purchase for a flat fee. Be careful though, you may be signing away all of your master and publishing rights - including your writer’s share - with this kind of deal, depending on how it’s being laid out. You also may not be listed as the composer of the song (or however you contributed work) -- the person who hired you will likely be listed as the songwriter instead. 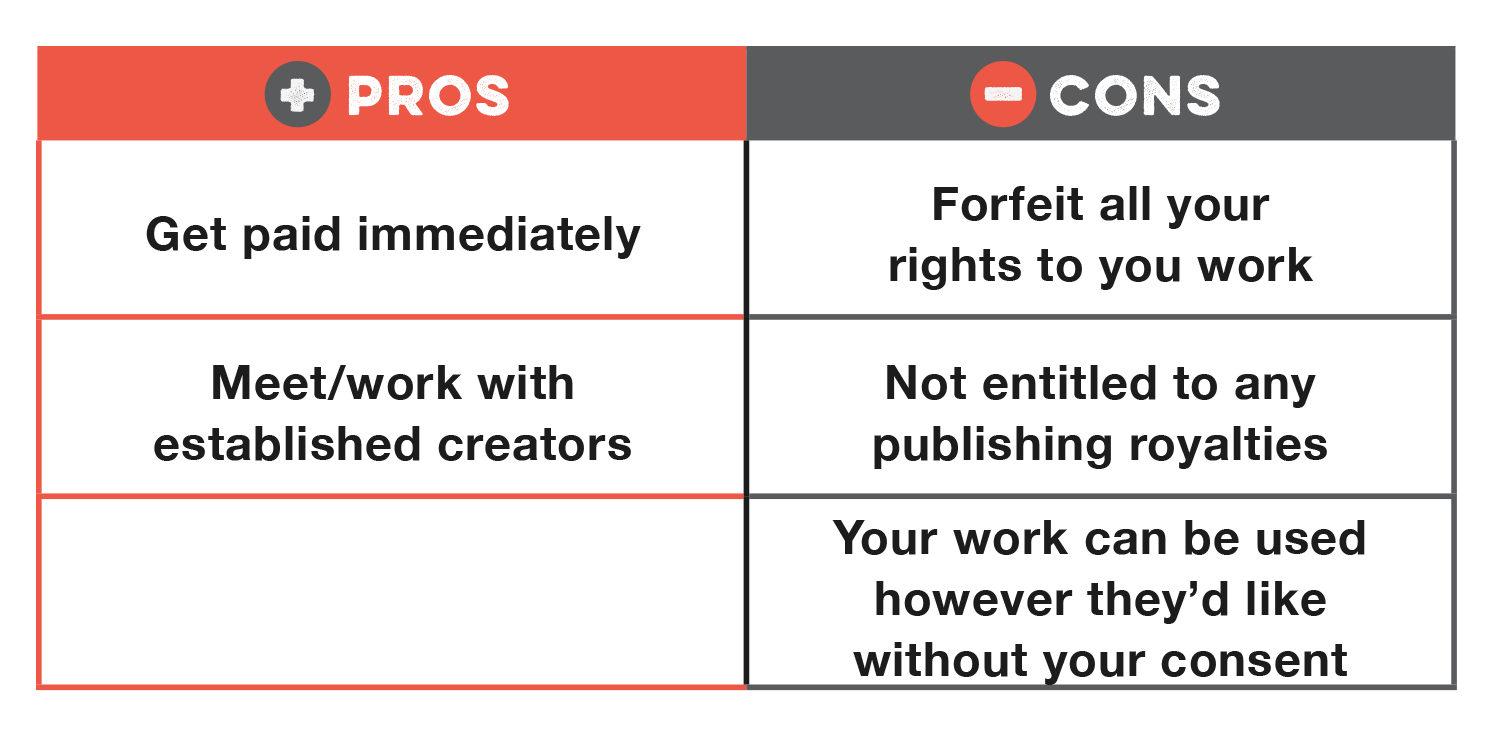 If this type of agreement is the best option for your situation or how you normally handle your business decisions, just make sure you read the terms, get everything in writing, and try to work in some ownership percentages so you can have some type of continuous revenue streams in the future. You never know when or if a song is going to get a lot of traction -- you don’t want to sign away that ownership too easily.

Making the right choice, for you

Music publishing companies are passionate about your music and career, but are ultimately in business to make a profit. They would not stay in business if they didn’t format their deals in a way that generates large amounts of revenue in their favor. They are experts in making predictions and analyzing financial risks, and are experienced in making these deals. This can also work in your favor. They are taking a financial risk in the hopes of making you successful.

An upfront advance or flat fee may sound like an abundance of income all at once, but don’t forget that the team that helped make this deal happen needs to get paid as well. You’ll most likely have to subtract a manager’s 15-20% fee, a business manager’s 5% fee, and an additional fee or 5% to a lawyer for negotiating the deal (and you definitely want a good lawyer). After all of this is deducted, you also need to pay taxes on what’s left. Adding another level, remember that your advance needs to be recouped in full by your publishing company before you are truly in the green. If what you are earning at this point is enough for you to justify the cons of giving away a percentage of your copyright, then maybe a traditional co-publishing deal is right for you. It’s also good to weigh your odds of how many syncs you’ll get through your publisher. If you already have a good amount of ad placement offers coming in, you may want to maintain your creative control. If you’re looking for more syncs, then a co-publishing deal may work for you.

In 2020, there are vast opportunities to promote yourself as an artist and/or songwriter independently and generate real publishing royalties without a creative team behind you. Songtrust serves an increasing number of songwriter’s, manager’s, label’s, and publisher’s catalogs around the world. Choose what’s right for you and set yourself up for success. Whatever you decide, we’re here for you.

How to: Avoid Conflicting Claims and Credit Errors in Songwriting

Publishing Royalties Amongst a Pandemic: COVID-19’s Impact on Royalty Collection