Working With A Producer

From hard rock to hip hop, it’s hard to find a hook-driven artist who hasn’t worked with a producer. But what if you’ve never stepped foot in a proper studio before? What is that experience actually like?

In the following guide, we break down everything you need to know about this side of the industry, complete with insider tips from producers Brendan Guzman, Anthony Delgado, and Melvin Darrell.

What Does a Music Producer Do?

Producers have a wide range of responsibilities, but their primary focus is steering a song, record, and/or album through every stage of its creative process.

“A thorough producer is involved in the music-making process from conception to release,” says Guzman. “They are the link that connects the artist to the audience.”

This bond is established through such essential steps as:

What to Consider When Working With a Producer

There’s more to making original music than a producer’s cost and time. You also need to think about such philosophical issues as what their style is and how deeply involved they will be.

“A lot of people think they just need a producer for beats,” says Delgado, “but there is a big difference between a beatmaker and a producer. A producer will help you with songwriting, vocal delivery, the beat, and the mix, and will ensure all the parts of the song are working cohesively to create a final product that sounds concise, intentional, and succinct.”

“Generally, the skillset varies per producer,” adds Darrell,” but here are some common roles that producers tend to fill: composer, music arranger, musician, songwriter, vocal arranger, audio engineer (recording, mixing, master), or project manager. Some producers specialize in one or more areas, and some can do it all.”

Much like any other musical collaboration, be clear about what you’re looking for and what you need help with. Some do this through a simple conversation in the studio; others break it down into a short document to have a reference for everyone’s roles. The goal is to get on the same page. You can also take this time to briefly chat about copyright ownership, a.k.a. splits, for the song. We’ll touch on this a bit later.

When it comes to setting roles and expectations, be honest and open. You’ll have an idea of what they are once a producer starts experimenting with your song, but it's good to articulate your needs from the very beginning to save everyone some time. You can do this by having a candid conversation or — even better— by sending reference music with comments about what you like and dislike about it.

“You might find it's a slower process to get your ideas across to the producer because you aren't ‘speaking the same language’ at first,” explains Delgado. “A good producer will ensure this rocky phase ends as quickly as possible by asking the right questions. Once that happens, having a producer in the session will take a ton of pressure off everyone in the studio because a good producer is able to support everyone in their process.”

“At a basic level, the producer should be professional and open to communication,” adds Darrell. “Your expectations should be in line with the scope of the work that needs to be performed and the level of expertise that the producer possesses. A rookie producer will usually render rookie results; you get what you pay for.”

Keep in mind fees and/or agreements

Naturally, you can’t expect a producer to help you out without getting paid, but there are also a few ways producers set up their fees. Generally, producers will take an upfront fee that covers their time and costs, which can be billed by the hour, day, song, or album, and many producers will receive points on the sound recording, and/or a split of the songwriting.

Give this some thought before you dive in; how do you want to structure this with a producer and what does your budget allow? If money is tight, “Don’t expect someone to work for ‘exposure’,” says Delgado. “That doesn't pay any bills.”

Promising something you can’t deliver is arguably even worse. “Keep your word,” says Delgado. “Don’t say you'll buy something and then ghost the producer for weeks because you don't have the money. Communication is key here.”

Discussing splits with your producer

Once you’ve determined your budget and found a producer to work with, it’s important to have a frank conversation about fees and splits. While some like to save these conversations for when the song is finished, you might want to consider discussing everything in detail before anything is written or wrapped — especially if you’re working with someone you’ve never worked with before.

“This needs to happen in the beginning,” insists Delgado. “I've had situations where I've spent over 40 hours (outside of the studio) on someone's song for absolutely no charge at all and when it came time to release they were sweating me over 10%. If 10% is worth more than maintaining a healthy relationship with me, then I don't want to work with you.”

As for how the split should be structured, Delgado prefers 50/50 arrangements because “I’m all about equality. I don't want to have to nitpick who added what to the song, and argue about how important that piece of the song is. Even if I'm working with an artist and I do all the songwriting, all the vocal melodies, the beats, and the mixing, I will still split 50/50. The relationship is more important in that case.

He continues, “It's not about the money for me; I just want to make music with people who share the same vision as me and respect me as much as I will respect them.”

Regardless of what you decide to do, make sure to document and log the agreement with a split sheet, and have all parties sign it so there is no ambiguity down the road.

How Do I Find a Producer?

If you’re new to the recording process or it’s your first time working with a producer, determining where to begin can seem daunting. As with most things, word-of-mouth is always a good place to start; feel free to ask fellow music creators who they can recommend from previous projects.

Another way is by researching the producer listed on liner notes of your favorite album or the writing credits on a song. While that way may involve the added task of finding their contact information, it’s a great idea if you love the sound on a particular album or song.

“I’m always in favor of meeting people in the world,” says Guzman, “so go to showcases/open mics/networking events and introduce yourself to strangers. The internet can be a good tool, too — notably YouTube — but that'd be a last option.”

At the end of the day, you want to make sure you and the producer vibe well together and can have a good working relationship. There are also online resources that can help you find the right producer for your project, such as the below:

Facebook has numerous producer groups, as does Discord. And many producers post sample beats & projects to YouTube for promotion - which can help you find someone with the right sound.

These platforms - Upwork or Fiverr - allows you to search for and hire, freelance music producers, and scan their portfolio within seconds. Keep in mind, you generally get what you pay for. A less experienced producer may charge less, but may not be able to create exactly what you want. That said, you could get on board with a future superstar early in their career if you go this route.

Similar to SoundBetter, Kollab boasts that you can “hire the world’s leading audio talent.”

Remember: keep it professional. Don’t spam a producer’s DMs or comments with your SoundCloud handle, asking them to hit you up. Be polite and give them some clear and concrete details so they know what you’re looking for.

What Questions Should You Be Asking?

Now that you know what a producer is responsible for, how to find them, and what to consider once you’ve decided to collaborate, you should reach out to a producer that makes sense for your music and ask them a few questions before sealing the deal, including:

“All of these questions will make things much easier and more transparent down the road,” says Delgado. “Ask as many questions as you need or want. Understand that you are probably going to be spending hundreds, if not thousands, of hours with this producer, so make sure your investment is going to the right player.”

In other words, take your time, do your research, and don’t be afraid to speak up if you don’t like or agree with something. At the end of the day, this is your music! 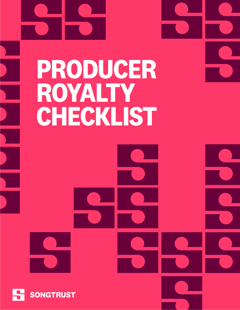 Are you a producer who just finished working on a song? Use this checklist to ensure that you're set up to collect all the royalties your song may earn globally.